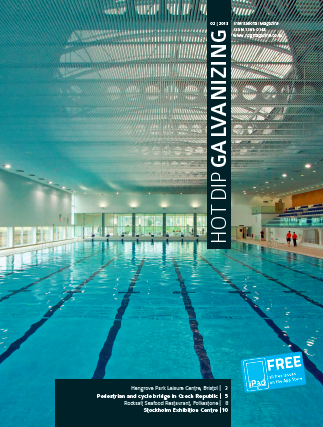 Regeneration is a prominent theme reflected through some of the projects featured in this issue. A spectacular leisure facility has been built on a former airport site in Bristol. On a smaller scale but just as important for the regeneration of Folkestone is the addition of a seafood restaurant on the seafront.

Linking old with new, a cycle and pedestrian bridge in Czech Republic provides a simple design solution that blends easily with its surroundings. On a slightly different vein is the weaving of a galvanized facade into a prominent structure in Stockholm.

We also feature an important article from European General Galvanizers Association (EGGA) and Swera KIMAB, a leading Institute within corrosion and materials research based in Stockholm. The article highlights the incorrect modern-day use of salt spray testing. Originally used for quality control of specific coatings or materials, the test has morphed into one that is used to generate misleading information on performance comparisons between different coatings.

Swera and EGGA do a commendable job in clarifying the reasons behind the misuse of this testing method.

A new bus station on the outskirts of the small town of Calpe, Eastern Spain, has added a much needed local facility. Built alongside the intersection of two main throughfares into the town centre, the new station brings order and…

“Aggressive Xpansion” is the third piece of work by Spanish neo-futurist artist Viktor Ferrando, within a series of related works called “Planet Ferrovia”. Railway scrap materials have been used to build up each of the individual sculptures and in the…

The opening of Hengrove Park Leisure Centre was a date to celebrate for thousands of local people in Bristol. The state-of-the-art pool and leisure centre opened its doors, ready to showcase the region’s newest and most spectacular, multi-million pound leisure…

If you are a user of protective coatings in the construction, manufacturing or engineering industry, there is one aspect of corrosion science that requires your careful understanding – that is the role and limitations of accelerated corrosion testing. For decades,…

The Bohemian city of Hradec Králové, which lies between the Elbe and Adler rivers, provides a collage-like mixture of historical buildings from various periods of history. Medieval houses and counter-reformation Baroque styles can be found, together with Postmodernist and contemporary…

Rocksalt Restaurant and Bar is a newly built destination restaurant in Folkestone Harbour and is the first restaurant venture for executive chef Mark Sargeant. The restaurant and bar forms a crucial milestone in the regeneration of Folkestone’s ‘Old Town’ and…

When it is dark for more than half the year, a bit of indoor greenery can help brighten up the day. At least that was the idea behind the long ‘green’ walls inside Stockholm International Fairs which has recently been…