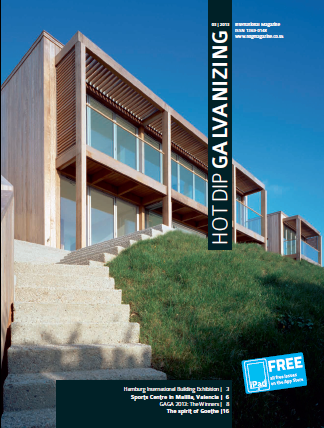 2013 celebrated the 20th Anniversary of our GAGAs. Our competition has gone from strength to strength and over 1,000 projects have been analysed and mulled over by our judging panels. The diversity and range has always been a feature of the entries ranging from the beautifully detailed projects of P. Johnson and Andy Scott to the glorious Pepsi Max Big One at Blackpool and The Eden Project.

Our public vote to select the Winners’ Winner from the last two decades resulted in a large number of votes with the overwhelming winner being South Porch Gates, Scotland. Will Alsop opened the ceremony with a confession that his GAGA galvanized watering can was one of his favourite prize Gordon Talbot from Ian Ritchie Architects emphasised the important role that galvanized steel plays within their design philosophy.

The importance of galvanizing both from a design and sustainable point of view is reflected by a number of projects featured in this issue such as the Peacehaven Wastewater Treatment Works that is reminiscent of the ancient English Long Barrow and the new sustainable projects from the recent international exhibition in Hamburg.

And let’s not forget the innovative and beautifully atmospheric sports facility in Valencia.

Galvanizers Association’s annual Galvanizing Awards reached a milestone this year with its 20th anniversary. Guest speakers and past winners attended the ceremony at the Royal Aeronautical Society in London this summer to celebrate the calibre of entries that we continue…

The Berlin-based artist group Inges Idee have designed a pylon-inspired sculpture for the international art exhibition Emscherkunst 2013. Its curved shape is half pylon, half man and recalls the spirit of Goethe, the Sorcerer‘s Apprentice. With a total height of…

What does the future hold for the 21st century city? That was the question which the Hamburg IBA (International Building Exhibition) set out to answer, and it offers some innovative and sustainable exhibits relating to current discussions on urban development.…

The Malilla Sports Centre in Valencia forms part of an important urban infrastructure plan managed by the regional government. The project is based on an initiative from the Valencia Municipal Sports Federation, which has been taken up by the Valencia…