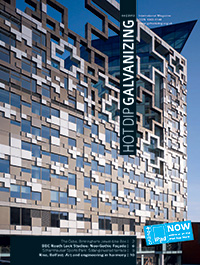 2012 has been a momentous year in the publishing life of HDG magazine. We have seen the launch of a brand new design, the emergence of an iPad version (available on the Apple App store) and a change of editor. I hope you agree that this has led to a more interesting and pleasurable read.

Although the economic climate continues to provide a gloomy outlook, it is heartening to see that the creativity and ingenuity of our designers continues to shine through. This is wonderfully expressed by “The Cube” in Birmingham, our first article. The jewel-like structure has helped to open up the heart of the city centre and features a fretwork screen that amazingly spans the outer edge of the building.

A new studio complex for the BBC displays a more playful form of design. The 300m clip-on, neo-gothic façade for the outer skin of the building attempts to create a link with the theatrical nature of its intended use; filming of Doctor Who and Casualty.

Much is said about the value of art within the public realm. “Rise” in Belfast sets itself a very high bar of achievement; that of creating community cohesion. Even if this is not reached you have to admire the engineering that has been part of its creation.

Surely it’s only a matter of time before the gloom is blown away.

The Roath Lock Studios are a major new TV production location for the BBC, otherwise known as the new home of Dr Who. It comprises a 3.6ha production village situated in Roath Basin, a 20ha area of former industrial land…

Bridge over the Waldnaab River

The Waldnaab River, in the Upper Palatinate, flows through a picturesque nature reserve. Part of the infrastructure for visitors consists of a bridge over the little river for pedestrians and cyclists. This changes the route of two existing ramblers’ footpaths…

The building’s unusual composition resulted from a considered response to its local and historic context. In plan, the building is broken down into two slim, offset blocks, in keeping with the scale of the neighboring cottage. This approach creates a…

The link between local public transport and private car gives many commuters a tried and trusted way of escaping daily congestion. The pre-condition for this is suitable infrastructure consisting of adequate parking space and good bus and rail links. The…

A new sculpture at the heart of a busy junction leading into the centre of Belfast attempts to capture metaphorically and physically the rising of a new dawn for Belfast and Northern Ireland. Rise – a 30 m spherical steel…

The terraces of the Scharnhauser Sports Park in Ostfildern follow the natural slope of the bank alongside the sports field. This helps the new structure to easily blend into the landscape. The design follows a simple pattern that offers an…

Over the years, many attempts have been made to transform the centre of Birmingham. In fact, if you have not visited the city for a number of years it is now virtually unrecognisable from just a decade ago. The transformation…