Every day over 500 million tonnes of steel are multycycled each year, making steel the world’s most recycled construction material. Furthermore, approximately 40% of all steel production is based on recycled scrap.

During the recent maintenance of flats in the Schothorst-Zuid district of Amersfoort, Portaal Eemland (one of the largest housing groups in the Netherlands) had a difficult choice to make : replace the whole network of balcony structures, somehow reuse them or carry out on-site maintenance.

After a lot of head scratching and number crunching, they decided that the most sustainable approach was to reuse the balconies.

The flats in Roelandplaats and Olivierplaats were constructed at the beginning of the 1970s. Each flat has a set of galvanized balconies at the front and back. There has been no maintenance on the galvanized balcony railings since they were fitted in the 1970’s.  The flats have served their residents wel, but recently a maintenance programme was initiated to give the area a new lease of life. The balconies have been extensively used by resdents ranging from fixing flower boxes, aerials and drying cloths.  After 40 years of use only very small areas of corrosion were found on the steel which in itself is very good considering the effects of everyday use and the initial high levels of sulphur dioxide that were present in the 70’s and 80’s.

Mr Ten Haaf, project leader at Portaal Eemland, “Because Portaal Eemland has a framework agreement with the Mens-Zeist company, based on performance-oriented collaboration, various scenarios for sustainable maintenance have been developed so that a well-founded choice can be made”.  Reuse of the existing railings was chosen as an alternative to replacement or expensive painting. In the light of re-using a product, cleaning and subsequent regalvanizing offered the best solution. Mr Ten Haaf: “The final decision to regalvanize the existing curved railings was partly due to the attractive shape that determines the appearance of the complex. In addition, hot dip regalvanizing is a sustainable solution – in the longer term as well”. The Metaalsluis company was contracted to regalvanize the120 balcony railings on the back wall.

This project demonstrates the use of steel and hot dip galvanizing top provide long life constructions and conserve raw materials. The restoration of this unusual building showed that the galvanized steel cladding and roof sheets, which have protected the building for nearly ninety years, can, at the end of their life, be re-galvanized to provide the same protection all over again.

The project architect Jacqueline Demaus, who received the commendation and £250, described it as follows: “The Pump Rooms at Tenbury Wells were built in 1861, towards the end of the nineteenth century fashion for health spas and watering places. They were designed by James Cranston in what might be described as idiosyncratic, late Chinese Gothic style. The structure was remarkably bold and innovative for a provincial building of that date. It utilised fiat wrought iron roofing sheets linked by wrought iron rolls, held in place by cast iron clips with foliated ends and supported on surprisingly slender structural timbers and portal frames. The building consists of an assembly room (6m x 9.5m), four bathing rooms, entrance halls and well tower containing the pump room with a mineral water well.

“The building was refurbished around 1911, during which the existing roof sheets and linking rolls were replaced with galvanized steel sheets approximately 1.5mm thick, the old sheets being cut down and used to clad the walls.

“The building was neglected for most of the second half of the twentieth century, and by 1998 was in a very poor condition, having been derelict for many years. For safety reasons, the cladding had been removed from the well tower roof.

“A comprehensive refurbishment of the structure was begun in 1998 and completed in 1999 at a cost of approximately {160,000 for the structure only. During this  refurbishment it was found that, in spite of the years of neglect, around 90% of the galvanized roof sheets fitted in 1911 were still in good enough condition to be regalvanized and then powder coated. The survival of these sheets amply demonstrates the longevity of galvanized steel even when neglected. All the new replacement sheets were made from pre-galvanized and powder-coated sheet steel.

“It is not known how many buildings were constructed using this method, and as far as is known, this is the only one to survive.”

Why galvanizing is sustainable 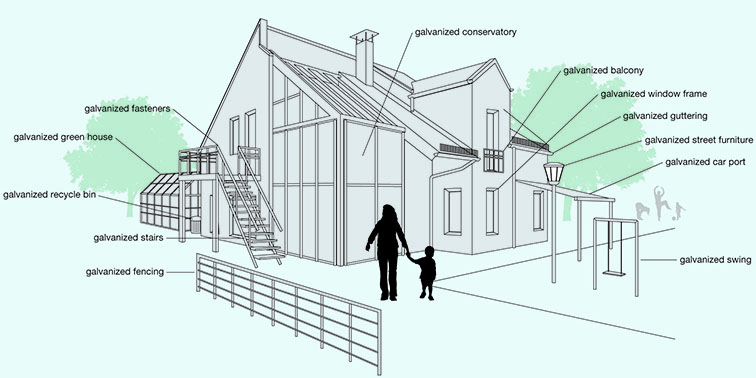