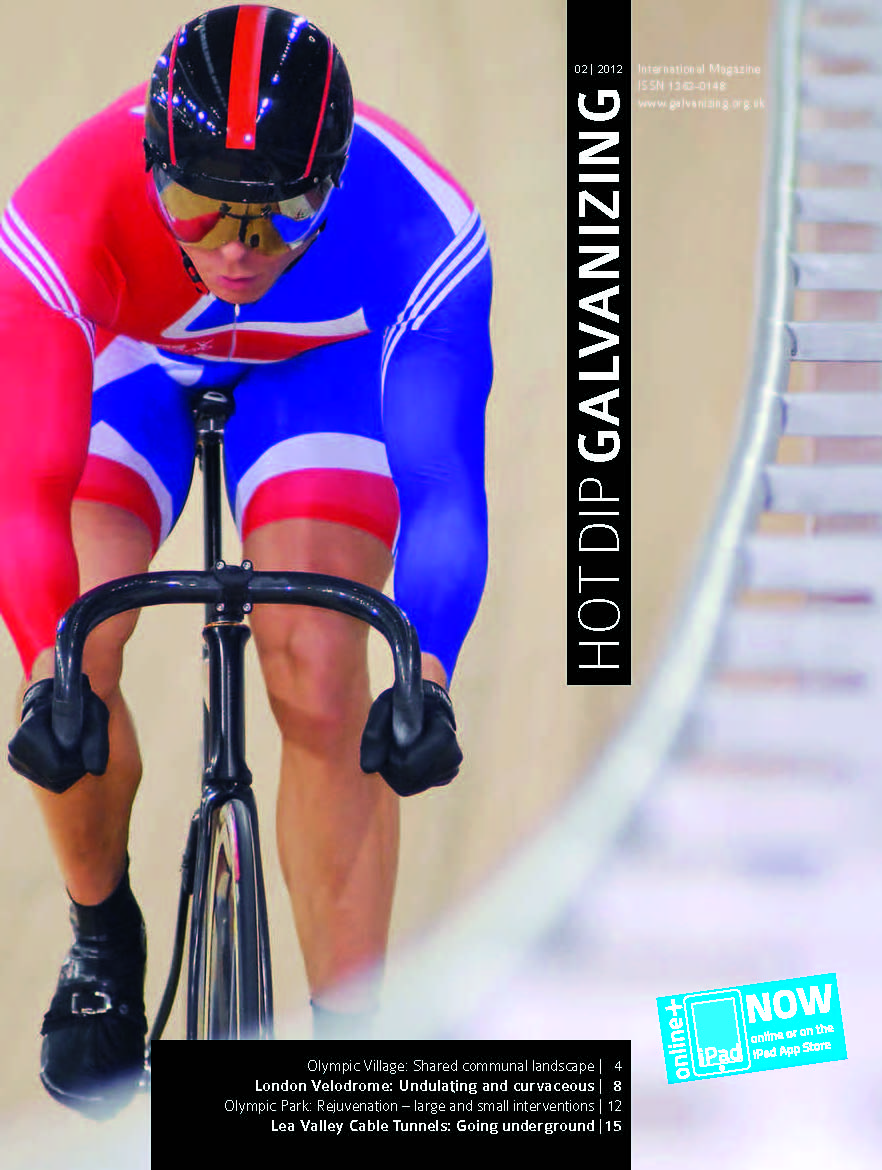 Welcome to the second issue of our redesigned magazine. I have taken over the hot seat from David Baron, our previous editor, having sub edited the magazine for longer than I would like to admit. I would like to thank David for his hard work and commitment to the magazine over the the last 20 years. I will endeavour to keep you updated with an eclectic mix of interesting, informative and delightful projects from the world of galvanizing.

Our special 2012 Olympic Games issue features projects both large and small that will play an important role within the Games. The curvaceous Velodrome takes design of its type to new heights, emphasising the pursuit of efficiency, lightweight construction and high performance standards. The Olympic Park has not only transformed an area that used to be an industrial wasteland into one that will host many of the sporting venues but will in Legacy, contribute to connecting and creating communities across the area.

Smaller scale projects that may not immediately grab the headlines have had an important role to play. The rerouting of overhead power lines to underground tunnels was critical to the functioning
of the Olympic site.

For digital readers, don‘t forget our magazine is available on the Apple app store.

Studio East Dining was a temporary pavilion, designed by Carmody Groarke, built on top of an eight-storey car park adjacent to the Olympic site. The structure was made entirely out of standard galvanized scaffolding poles taken from the site and…

At first sight, a project that involves rerouting power lines may seem insignificant or even described as a bit boring. However, the complex and challenging project to move two sets of existing power lines from pylons into tunnels was fundamental…

When, in July 2005, the IOC president Jacques Rogge made the dramatic announcement that London had won the campaign to host the 2012 Olympics, it set off a dramatic programme of planning, building and organising that may well go on…

Bikes ridden at speed around a banked arena seem to draw upon some primeval instinct that engenders a competitive edge for the riders and an almost uncontrollable zeal amongst the watching crowd. Maybe there is an intrinsic link within the…

Situated to the east of London, encompassing four of the most deprived boroughs of London, the site that has become the Olympic Park started from very humble beginnings. The full legacy of centuries of industrial activity on the site became…

With the world’s attention normally drawn to the high profile stadia that will host the various events for the Olympic Games, an important aspect that can sometimes get overlooked is that of accommodating, in London’s case, over 17,000 athletes and…